He looked back at Chetana, seeing the strain and terror written clearly on his friend’s tanned face. Rashied swallowed the heartache lodged in his throat and nodded. “Then let go.”

Chetana’s nostrils flared and his brown eyes doubled in surprise. “What?” 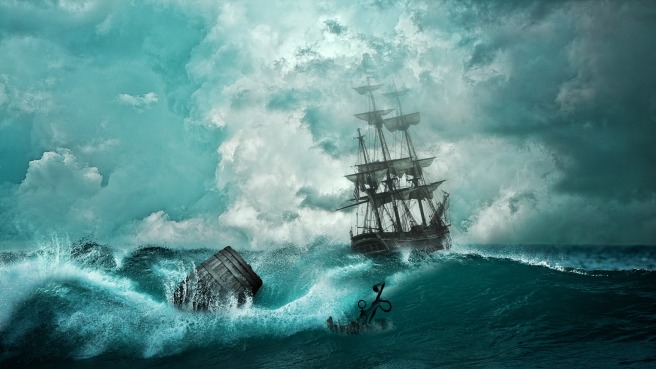 His friend drew in a deep breath. Then he let go.

They hit the water before he could suck in enough air. The water was hard as stone and colder than death, swallowing them both eagerly. Even with his new strength, Rashied couldn’t keep his grip. He screamed as Chetana’s shirt slipped out of numbing fingers, and the ocean took the opportunity to fill his mouth and nose with bitter water. It rushed down into his lungs. The world started to fade out.

And then his own shirt tightened against his chest and jerked him above the frothing waves. There was a moment where all he could do was cough and shudder as the ocean poured out of his mouth. It took him that and longer to realize he was being hauled up into a lifeboat. He fought against the hold, trying to throw himself back into the water.

He knew the mysterious woman’s bark the instant he heard it. “Chetana!” He shouted back, never taking his eyes off the water as he searched for some sign of his friend. “I lost him!”

Rashied struggled to turn his head around and finally saw that the woman wasn’t alone in the small boat. Her ward’s giant eyes blinked up at him from the floor between the benches. Chetana’s unconscious head was in her tiny lap.

He smiled. Rashied tried to sit up and look around. There would be debris. Wreckage, and maybe even bodies. Things he didn’t want to see. But there was something important he had to know. “Are we on the other side of it?”

“Other side of what?” The little girl asked.

The hard line of the woman’s mouth told him that she knew exactly what he was talking about. “We made it, didn’t we?” He pressed. “We made it through the wall.”

The woman gave a single nod. Rashied smiled again. “Good.” Then closed his eyes, and for a little while he didn’t know anything else.

So! Now that you’ve read my most favorite story ever, what do you think?? Should we do this again? Do you like the once a week thing? Should we wait longer? Go faster? We want to make this as rewarding for you as we possibly can! To do that, we need your feedback! So let us know!